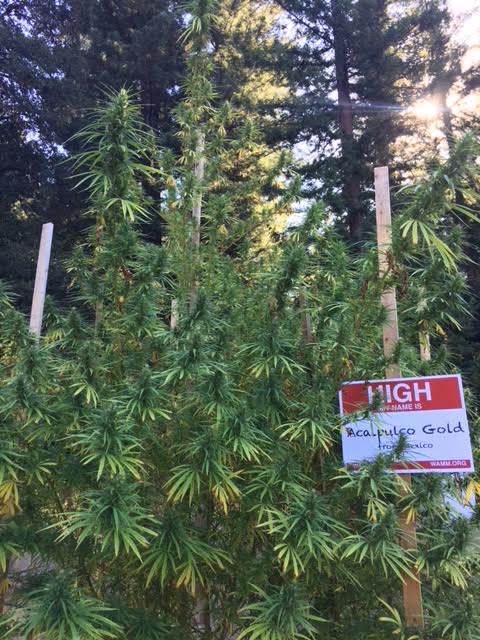 W.A.M.M. Garden in Boulder Creek growing rare cultivars from around the world.

First time I heard about Lamb’s Bread, it was Bob Marley speaking about legendary Jamaican cannabis in an interview sharing his love for the cultivar and how “when you smoke the herb it reveals you to yourself”. Later I traveled to Canada for a family wedding and was fortunate to source Lamb’s Bread in Banff. The pine nose with sweet tropical brightness made an impression yet I was skeptical that this flower was the real deal.  All was confirmed when I had the opportunity to tour the breathtaking landrace garden that a dear friend along with a team of mindful stewards cultivated on behalf of the work of Valerie Corral and WAMM. I found Lamb’s Bread among the Afghan Kush & Acapulco Gold and squeezed a flower to revisit the memory of Lake Louise and Cannabis in Canada.

Landrace cultivars are cannabis varieties that evolve to their region as inbred lines that acclimate and develop unique and coveted survival traits like a resilience to mold and mildew coming from the coast or drought resistance coming from high deserts of Afghanistan.

Unique traits developed from generations and decades of evolution naturally without any human interaction. Think of these types of landrace cannabis as primary colors and rare colors like cerulean, fuchsia and chevaulin chartreuse which provide a special hue for distinct purposes in the greater picture of health and wellness. For example, THCV, or tetrahydrocannabivarin, is a compound in cannabis or cannabinoid that helps regulate appetite in such a way that you can go longer between meals. THCV satiates the body to maintain a strong metabolism and this cannabinoid co-evolved to complement the humans in the regions of Africa that would benefit from this effect while on the hunt or between meals. It furthers the idea that cannabis like canines became our best friend complementing our endogenous chemistry to provide the body what it needs to maintain balance & wellness no matter what the environment or lifestyle of the region.

Preservation work is needed in these landrace lines and many craft cultivators understand the need to preserve the integrity of the lines while leveraging the positive traits nature evolved over generations. Slowly but surely as a growing community we are rediscovering our natural roles as stewards of the earth and redefining what it means to be an American Small Farm stewarding the ancient lines for future solutions in health and wellness.